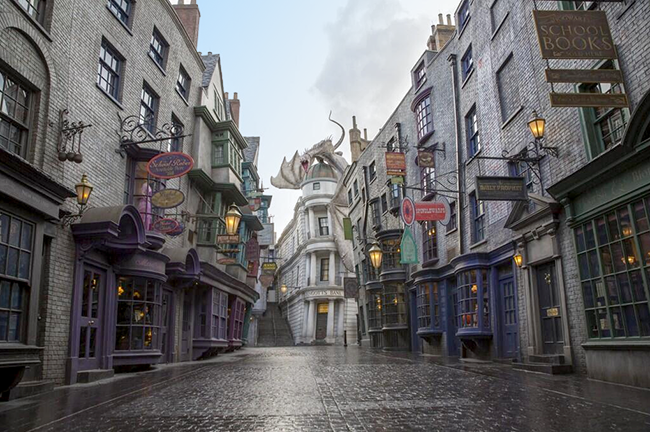 Universal Studios is putting on the finishing touches preparing the new Orlando attraction to open to the public July 8, 2014. Diagon Alley promises to be as popular as the Wizarding World of Harry Potter (Hogsmeade in Islands of Adventure) when it first opened. Expect huge crowds.

The featured ride at this Orlando theme park is “Harry Potter and the Escape From Gringotts.” It will feature a lot of new technology and could experience a few glitches. Do not be surprised at a few ride closures during the initial weeks of being opened to the public. At the present time, Universal is anticipating the ride to be fully functioning with no delays.

If you’ve visited Islands of Adventure and have spent much time in Hogsmeade, you’ll notice that the area is not all that large. Diagon Alley is much larger. Once you step off of the train, you’ll be immersed in a land that you only imagined could exist in a book (or movie). Diagon Alley is one part of this new attraction. The shopping district is expansive.

Get ready to exchange your muggle money for Wizarding Bank Notes. These Banks Notes can be used for almost anything within the theme park. If you don’t spend them all, you can ask the goblin to exchange the notes back into dollars. Of course you’ll probably want to keep a few as a souvenir – hince another way for Universal to make money. I venture to say that you’ll find plenty to purchase while in Diagon Alley.

Shopping at this Orlando Theme Park

You will no doubt do a lot of shopping in Diagon Alley. If you have read the Harry Potter books or seen the movies, there are a lot of really cool, dare I say ‘props,’ that most anyone would love to have. ORLANDO TOURIST TIP: Here are the most popular items or categories and where to find them once you arrive in “London.”

Magic Wands: Several shops will carry them. Most popular place to purchase will continue to be Ollivanders. The new interactive wands contain a chip so that at various places within the park, the correct wave of your wand will make magic!

From Pygmy Puffs to Expandable Ears: Most families have a jokester who loves practical jokes and tricks. The new novelty shop, Weasleys’ Wizard Wheeses will sell everything the twins were noted for. From plush toys to prank props to love potions.

Death Eater Masks: If you like the dark objects, make your way down Knockturn Alley and step inside Borgin and Burkes. Expect to see a lot of skulls and costumes, as well as jewelry, gifts and other dark arts.

Costumes: For robes, school uniforms and other attire as seen in the movies, be sure to shop at Madam Malkin’s Robes for All Occasions. This place will be popular for Halloween costumes.

Other gifts and props: Many other items will be available including Quidditch supplies (Quality Quidditch Supplies), writing supplies (Scribbulus), telescopes (Wiseacre’s Wizarding Equipment) and of course, more wands (Wands by Gregorovitch).

Dining at this Orlando Theme Park

All of this shopping will surely make you hungry, and Universal Studios has you covered there too in Diagon Alley. Refreshments, such as Butterbeer Ice Cream will be sold at Florean Fortescue’s Ice-Cream Parlour. A hearty meal of British food will be served up at the Leaky Cauldron. Lunch and dinner will be available every day.

ORLANDO TOURIST TIP: To avoid the scorching summer heat, and the fire from the dragon atop Gringotts Bank, you may want to wait until this Fall or coming Winter to experience this new Orlando attraction. If you simply cannot wait, try to avoid the first few opening weeks and weekends this summer. Anticipate record-breaking crowds for the first few months that no wave of a wand will be able to make disappear!