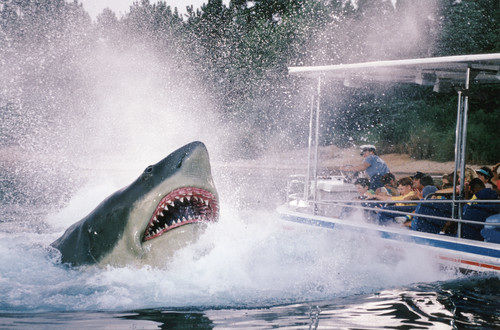 Universal Studios Florida will be permanently closing the “Jaws!” There are a few more weeks left to experience the ride at Universal Orlando Resort, and with the holidays upon us, it is a good time to visit this Orlando theme park. The ride and Amity area of Universal Studios Florida will be closing for good on Monday, January 2. The ride is one of the longest running attractions in Central Florida, opening in 1991, and will be missed by many park goers.

“Jaws” is one of the last standing original rides from when the theme park opened. Guests fill up tour boats which wind around the attraction, then are suddenly “attacked” by a robotic great white shark! The ride was based upon the 1975 movie directed by Steven Spielberg. Once it closes, “E.T. Adventure” will be the last original ride open in this Orlando area theme park.

While there is much speculation as to what will replace this attraction, I have no doubt it will be tied to the overwhelmingly popular Wizarding World of Harry Potter which has increased the Orlando theme park’s status immensely. There are a lot of possibilities, so we’ll have to wait for further announcements from Universal.

In the next few weeks, while you’re enjoying the “Jaws” ride one last time, you’ll also enjoy Universal’s holiday events. There is a lot going on at the theme park. You can get all of the details by visiting their web site, but make sure you check out these holiday happenings:

Say goodbye to “Jaws,” and enjoy one last bite!