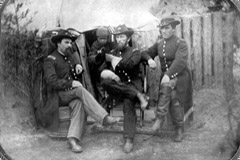 The Orange County Regional History Center is marking the 150th anniversary of Florida joining the Confederate States of America.  The “Florida in the Civil War” exhibit will run through June 12th.   Although there weren’t a large number of battles that took place in Florida during the “War between the States”, it still played an important role – shipping salt and beef to the Confederacy.  According to a display in the history center, Florida cowman Jacob Summerlin agreed to ship 600 herd of cattle each week to North Florida during the war. He provided a total of 25,000 animals but was never paid.   And, high-quality sand from the Goose Creek Wetlands south of Tallahassee enabled production of up to 200 bushels of salt a day.

You will be able to view rare artifacts from this era, which include a noncommissioned officer’s sword from the 7th New Hampshire Infantry, a Colt revolver, and many other items.  There are also objects from the wreck of the Union steamship Maple Leaf, which include an original national flag, Confederate uniforms, correspondence, weapons and other personal belongings.  (The Maple Leaf was located in 1984, and many of the items were very well preserved.)  Cynthia Cardona-Melendez, curator of collections said “This is the first time these have been seen outside North Florida”.  Included in the display is the story of Winston and Octavia Stephens, told in the form of personal letters between the husband and wife.  The Stephens’ descendents were kind enough to loan the letters as well as a photo album, swords, and a Confederate belt buckle.  While you’re at this Orlando attraction, be sure to check out the long photo on the wall of a group of Civil War veterans.  It was taken in 1920 in front of the Orange County courthouse, which was then where Heritage Square is today, right in the front yard of the Orange County Regional History Center. Take a look at the faces and the medals of the survivors.  Another interesting item that is on the way is Nina, a baby doll that was used to smuggle medicine and supplies past Union blockades.   Nina is coming from the Museum of the Confederacy in Richmond, Va., but her arrival in Orlando has been delayed because she is being x-rayed and undergoing forensic testing in Virginia to determine what she once hid in her Paper-Mache´ head.   The exhibit also features special panels for kids that helps explain some of the terms used in the exhibit.  The kids can also try on costumes of the plantation women and soldiers.